IATA reports greater demand in July, but still far from 2019

Both international and domestic travel demand in July showed significant improvement from June, but remained far below 2019 levels. according to the International Air Transport Association (IATA).

“As the Northern Hemisphere summer travel season draws to a close it is clear that too many governments missed the opportunity to apply a risk-based approach to managing their borders. The growing number of fully vaccinated travelers and the prevalence of testing provided the chance to restore international connectivity and bring much needed relief to economies that are heavily reliant on travel and tourism. Instead, governments continued to behave as if it was the summer of 2020. Economies and the labor force will pay the price for decisions that were made not based on science, but on political expediency. Governments have rightly urged their populations to be vaccinated; now governments need to have confidence in the benefits of vaccinations—including the freedom to travel,” said Willie Walsh, IATA’s Director General.

“July results reflect people’s eagerness to travel during the Northern Hemisphere summer. Domestic traffic was back to 85% of pre-crisis levels, but international demand has only recovered just over a quarter of 2019 volumes. The problem is border control measures. Government decisions are not being driven by data, particularly with respect to the efficacy of vaccines. People traveled where they could, and that was primarily in domestic markets. A recovery of international travel needs governments to restore the freedom to travel. At a minimum, vaccinated travelers should not face restrictions. That would go a long way to reconnecting the world and reviving the travel and tourism sectors,” said Walsh.

All regions showed improvement, though July traffic data from Africa was not available.

North American carriers: International demand was down 62.1% compared to the same period in 2019. This is a significant improvement over June’s 69.4% decline versus two years ago. Capacity sank 52.0%, and load factor dipped 18.6 percentage points to 69.3%.

Latin American airlines posted a 66.3% drop in July International traffic compared to 2019, an improvement over the 69.8% decline in June compared to June 2019. July capacity fell 60.5% and load factor dropped 12.6 percentage points to 72.9%, which was the highest load factor among the regions for the ninth consecutive month.

Asia-Pacific again showed the worst figures, with international traffic down 94.2% compared to July 2019, an insignificant change from the 94.7% drop registered in June 2021 versus June 2019. This region continues to have the strictest border control measures. Capacity dropped 86.0% and the load factor was down 48.2 percentage points to 34.3%, by far the lowest among regions. 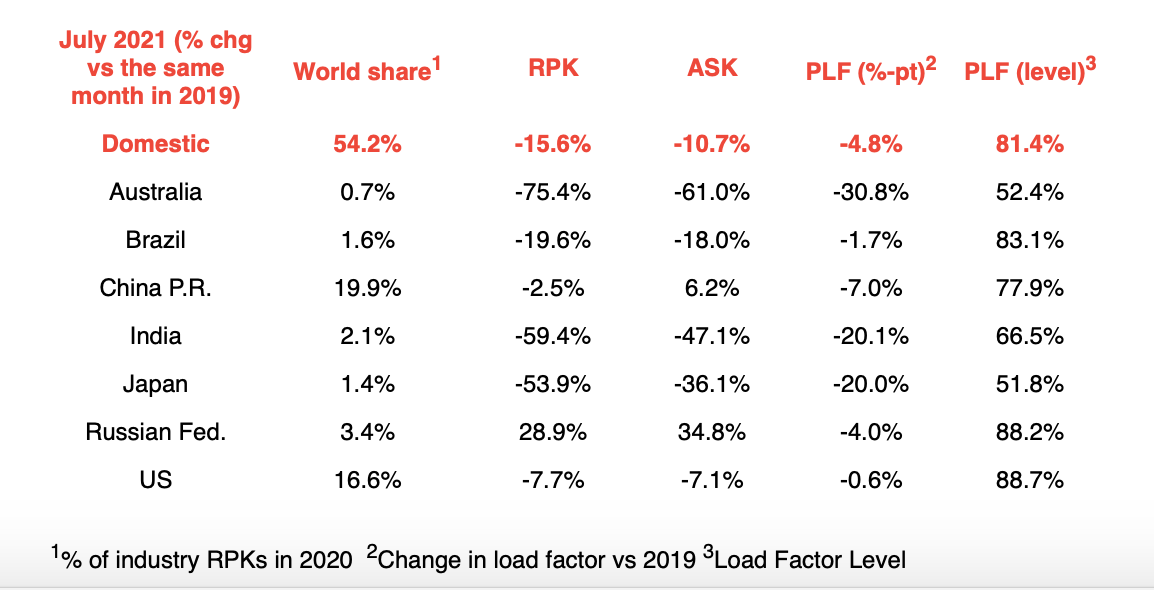 Australia’s domestic traffic went in the opposite direction, from a 51.4% decline in June 2021 vs 2019 to a 75.4% decline in July versus two years ago, amid stricter domestic lockdowns in response to a spike in the Delta variant.

​US liquor group Brown-Forman Corporation is joining RE100, a global environmental initiative,…

​In a move that consolidates and clarifies both its machine-made and handmade cigar divisions, J.Cortès and Oliva Cigars…