Travel analytics company, ForwardKeys, reveals that four fifths of flight capacity between China and the rest of the world has been cut back due the global pandemic COVID-19.

In response to emergency government regulations, seat cancellations began in early February and by the third week of the month, only 20% of seats remained in service. 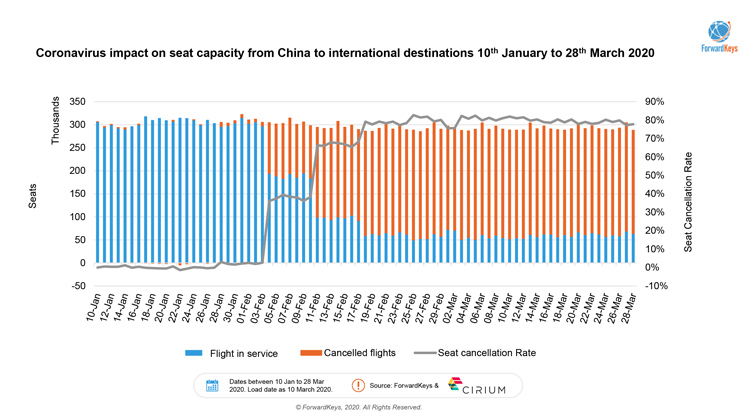 Looking at the different regions of the world, Asia has experienced the greatest impact in terms of the total number of seats lost, at around 5.4 million in March. In percentage terms, travel to North America is worst affected: American, United, Delta, and Air Canada canceled all their flights to mainland China; and Chinese carriers cut their capacity by 70%. Between China and Europe, over 2,500 flights have been eliminated in March. The three major Chinese carriers cut capacity by 69%; while BA, Lufthansa and Finnair ceased their services completely. Qantas and Air New Zealand also stopped flying to China, which left only about 200 flights in March to Oceania, provided by Chinese airlines. Capacity between China and the Middle East & Africa is also substantially down but less in both percentage and absolute numbers. Most flight suspensions are currently due to remain in force until 28th March, the end of the winter season. 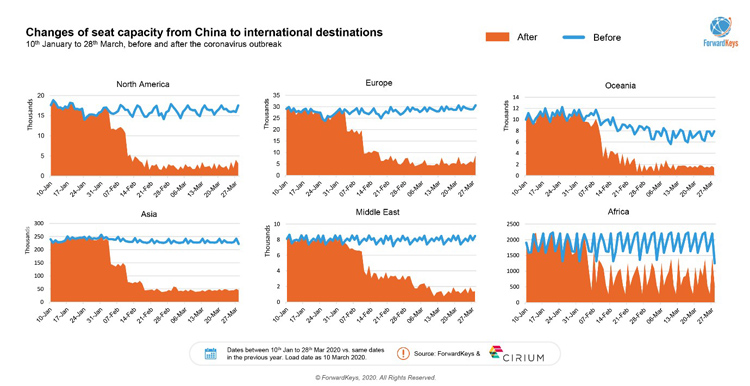 According to China’s Civil Aviation Authority, during the third week of March, 72 destinations in 38 countries had direct air links to China, which is around a third of the pre-crisis level.

Olivier Ponti, VP Insights, ForwardKeys shares, “At the start of the year, we were looking at another year of healthy growth in air travel from China. But now, we are witnessing the grounding of aircraft on an unprecedented scale. The loss in seats is more than the entire outbound market from the five Nordic countries combined.”

Illva Saronno Holding has joined the army of alcohol companies to support COVID-19 relief. The company has decided to convert…

L’Oréal USA today announced a multi-faceted initiative to support Americans during the COVID-19 outbreak and recovery. This…

Coty Inc. has started production of hydro-alcoholic gel, which is used as hand sanitizer, to help combat the COVID-19 virus.…

Distell to produce sanitzer in…

Africa's spirit, wine and cider giant, Distell, has come forward to produce hand sanitizers and other hygienic products at…