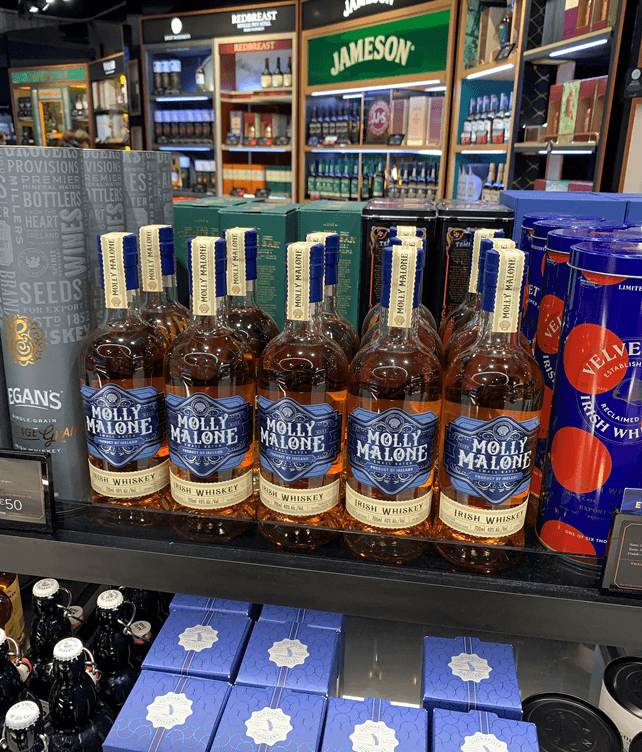 Travel retail is among the key channels being targeted and its first listing has been achieved with Irish operator Aer Rianta International at Dublin Airport.

The whiskey – primarily targeted at an Irish-American audience – has been distilled using traditional Irish techniques. Small Batch is drawn from a number of carefully-selected Irish distilleries using the finest Irish malts and grains. They have been crafted in small batches to create a premium Irish whiskey.

The Molly Malone Whiskey Company was founded by Richard Lombard-Chibnall, who previously spent 30 years working for the family company, Lombard Scotch Whisky, latterly as Global Brand Director. Lombard-Chibnall’s family have traded in wine and spirits since the late 17th century and 60 years ago became one of the founding independents of the whisky industry.

The name of the brand was made famous in modern times by the popular song “Molly Malone” (also known as “Cockles and Mussels”), which is set in Dublin, Ireland and based on a character of the same name from the 17th century. The song has become a uniting celebration of the Irish.

Molly Malone Small Batch 70cl is described as light on the palate and sweet. To enhance the flavor of the whiskey without overpowering the light character of the malt, second fill bourbon casks are used from the highest grade American white oak.

On 1 April, the product was awarded a Silver Medal by the Spirits Business in its 2022 Spring Tasting Competition.

Lombard-Chibnall said: “Molly Malone is in the DNA of the Irish and we have created an initial product which has been very well-received and that we are very proud of. We have major plans to grow the brand internationally and make Molly Malone Irish Whiskey become known as the go-to drink for a celebration of Ireland.”

Of Maxwell’s appointment, he added: “Garry has worked in travel retail for over 40 years in all forms of the business and is excited to be working with such an iconic brand name as Molly Malone. Equally, we are delighted to secure his experience and services for taking Molly Malone into more airports and other travel retail locations across the world.”