Figures reported by the International Air Transport Association (IATA) show air traffic recovery continued in November 2021, but the association cautions that this trend will show a reversal once subsequent months are accounted for, due to the emergence of the Omicron variant.

The following figures are in comparison to 2019 unless stated otherwise.

• Domestic RPKs showed a decrease at 24.9% lower versus 2019 compared with a 21.3% decline in October. This was mainly driven by China, where travel restrictions were tightened in a number of cities resulting in a drop in traffic of 50.9% compared to 2019.

• International passenger demand in November was 60.5% below November 2019, bettering the 64.8% decline recorded in October. 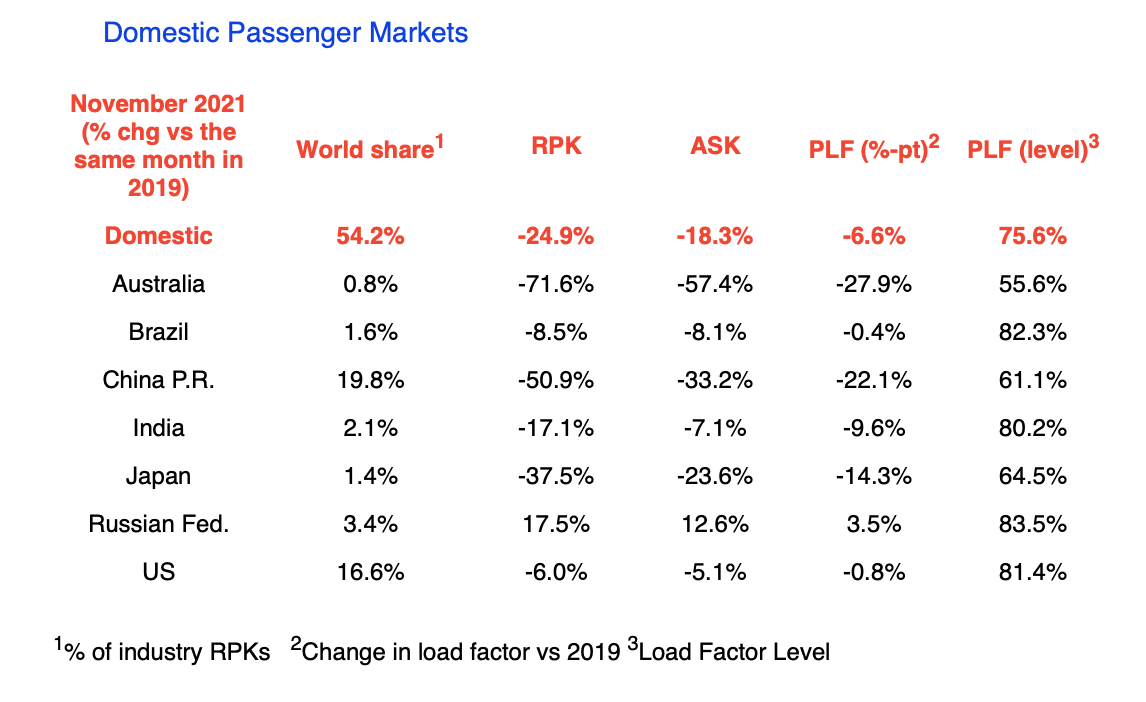 • Asia-Pacific remained the lowest region, though at -89.5% November international traffic was an improvement over the 92.0% drop in October.

• Middle Eastern airlines showed a substantial improvement in November, with a drop of 54.4% compared to November 2019. October had showed numbers 60.9% lower than 2019.

• North American carriers showed the greatest improvement in November, with a 44.8% traffic drop in November versus the 2019 period as compared to a 56.7% decline in October vs October 2019.

• Latin American airlines also showed an improvement in November vs October, with a 47.2% drop in November traffic a considerable improvement on the 54.6% decline in October compared to October 2019.

• African airlines showed a slight improvement in November, with traffic at 56.8% lower than 2019, while October’s decline was 59.8% compared to October 2019.

“The recovery in air traffic continued in November. Unfortunately, governments over-reacted to the emergence of the Omicron variant at the close of the month and resorted to the tried-and-failed methods of border closures, excessive testing of travelers and quarantine to slow the spread. Not surprisingly, international ticket sales made in December and early January fell sharply compared to 2019, suggesting a more difficult first quarter than had been expected. If the experience of the last 22 months has shown anything, it is that there is little to no correlation between the introduction of travel restrictions and preventing transmission of the virus across borders. And these measures place a heavy burden on lives and livelihoods. If experience is the best teacher, let us hope that governments pay more attention as we begin the New Year, ” said Willie Walsh, IATA’s Director General.