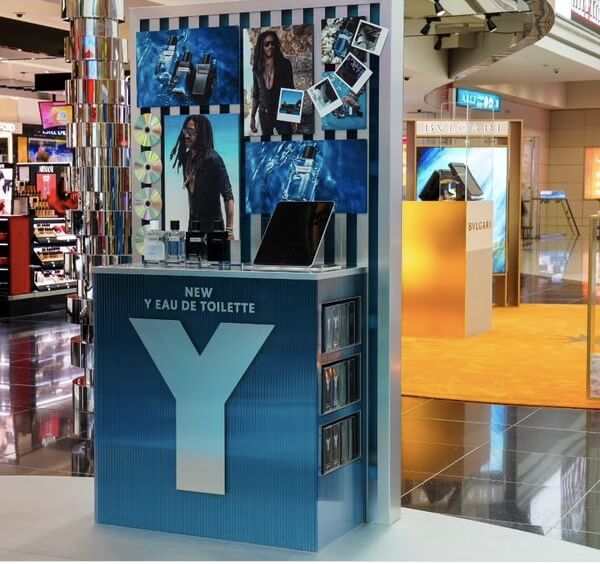 YSL Travel Retail EMEAI took over Dubai Airport Terminal 1 in March with a pop-up celebrating the launch of the new Y edt.

Launched in 2017, the original Y fragrance quickly became the masculine pillar of the brand and a key player in the men’s fragrance market. In 2022, YSL has revamped the original fragrance with an edt.

Y is inspired by rock music with Lenny Kravitz as its ambassador.

The launch is accompanied by an inspiring campaign in which Kravitz shares a personal part of his life. The film captures his journey back to his roots in the Bahamas, embracing a new motto: “to know where you’re going, you need to know where you’re from”

For the launch, YSL Travel Retail EMEAI offers a seamless online and offline experience that accompanies shoppers along their entire consumer journey: pre-trip, with teasers and information on social media about the product; and in the airport, with a podium and digital campaign that geotargets them and drives them to the pop-up.

At the pop-up, passengers discover a large immersive floor and the film of the new campaign featuring Caribbean seas.

And for the first time in the history of the brand in travel retail EMEAI, a dedicated online and offline gaming experience has been developed for the launch: Y rock gaming. The rules are to try to catch a maximum of music notes while the Y campaign track is playing and win a reward.

The entertaining game is also accessible by QR code, which makes it scalable to all the podium configurations, the company said.

The podium ran throughout March at Dubai Airport, in Dubai Duty Free Concourse D Circle 2 in T1, before moving to London Heathrow CTT in T5, where it will run until the end of April.

In 2021 the Y franchise reached the top three in the US and top eight worldwide, according to L’Oréal Travel Retail Worldwide.

​BVLGARI debuted its redesigned corner stores at Istanbul Airport, fittingly bringing the magic of the Eternal City to another…